Social Media and Being Almost Famous 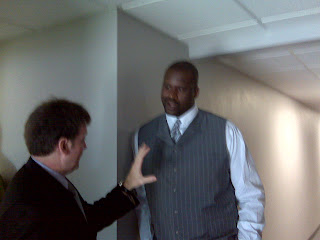 A career can cross a lot of paths. The two gentlemen in the photo are standing about twenty feet from my office door. One is an exec at our company and the other is one of our business partners. I'll let you figure out who they are. Hint: the short one worked for a much more famous executive and the tall one is, tall, even in sneakers.

In all the fun of the Tweety Bird posts, I've been thinking about the social media aspects of our careers. I am pointedly not a social media expert. I've been around about twice as long as the folks sporting that badge have. As a musician, one time actor, still writing and recording because it's like the breathing habit, hard to shake, I do know a little bit about media.

Take a look at this graph. It's from my YouTube insight page.

The left and right sides are different to say the least, and the number of countries where I can't imagine having fans, I do. I learn a lot from the Insight stats. A picture is worth whatever it's worth but the dramatic increase in views of my videos can't be argued with and there are only two causes: 1) posting more frequently and 2) Facebook. Of the two, the second is the engine: Facebook.

So even for the hobbyist, if you want to put work in front of people, you have to find them and Facebook is rather good for that. I've a MySpace music page as well and there is nothing like these results to be had there. Twitter? If I want a bigger first day release bounce, Twitter would be a way to get that but frankly, Twitter wastes too much time on trivia and not being a fully-developed attentivore, I don't have it to waste. Yet I know some fairly famous people (actually, some very famous people) and those relationships don't get me those kinds of results in page views. That takes real fans, friends and the mildly curious.

Social media is here to stay and for those careers that do rely on being famous or almost famous (mine doesn't), careful use of social media such as Facebook is a skill you need these days as other aspects of the media industry are collapsing. Would I go hire a social media expert for that? Possibly but probably not. It isn't that hard to figure out unless of course, Vanity Fair calls, but until then, use it while it's still free.

They walked into the punch, but then as I dig around more, I realize the question is why the punch at all? It is time to call BS on the snark industry of blog journalism. They is geeks and us is geeks and they may be divas but they's our divas.

Read Everybody Sucks by the same author, Vanessa Grigoriadis. The snark chic is the culprit.

Posted by Len Bullard at Thursday, January 14, 2010 No comments:

Tweety Birds: It's The Web, Stupid!

While working on a creative response to this flap (dieing down but still fun), I ran across this article from the author of the Vanity Fair article that started the mole rolling, Vanessa Grigoriadis. A couple of points:

1. She isn't a hack. Vanessa can write and she is a decent journalist.

2. In the article, the environment she describes is deeply flawed, seamy, and rage addicted.

3. She admits to tweaking noses as part of the job.

Past the screeching from the Twitter crowd and their fans, it's worth reading the article to understand how the web may indeed be transforming the publishing industry and journalism, but it may be devolution at light speed.
Posted by Len Bullard at Wednesday, January 13, 2010 No comments:

Ursula leGuin resigned from the Author's Guild over their acceptance of the Google settlement regarding copyrights of published works.

A war with the self-proclaimed digital royalty of GeekSheik is coming. They are destroying the creative ecosystem and real artists are shooting back.

Tweety Birds: The Second Wave Off

It seems that digging the hole and standing in it is how tweety birds rest for the winter.

I have to admit, when I heard the news I immediately called a family member and dropped a Ron Burgundy, “I don’t know how to put this, but I’m kind of a big deal.”

It's hard to expand on that. In her opinion and that of her mates, the missed opportunity was to tell the story of their success, or as Felicia Day put it, "new, different and powerful". I sense Day is moving on from the story possibly because as an entertainer, once the story quits being funny and she attempts seriousness it begins to turn into a story about young women who need to get over themselves as correspondents have been suggesting, and that's not a good image for an entertainer.

The trap is that now of those who are climbing aboard the Geek Train are using this tempest in a teapot to push their own wares as social media mavens (Digital Royalty? Really?) it spins ever more toward the silly pole and as the avatar of the story (the irony is thick here), Day gets pulled into the spotlight of this farce. Que lastima!

If they claim it is all about them, they are the attentivores as named, insipid, vapid and with none of the media savvy required by their portfolio customers. If they claim it is about Vanity Fair, they are fighting human nature's need for a good gigglefest and once again accentuating that in the media where they portray themselves as experts, they are wanting and customers beware. If they recognize they are simply the latest women to get kicked in the ass by the Lolita Effect which they are themselves exploiting, there might be a story with legs and not just the ones in the photo. It might be a broader issue about the sexualization of women getting younger every year and creating problems for all women as Amber Fenner Gray points out.

So far, they aren't that smart and perhaps their clients will take note. Day will move on because she does have serious work to do on the next season of The Guild and other projects. If she is the artist she desires to be, she'll find a way to salvage this in comedy with a point.

UPDATE: The new meme to keep it going is the article is somehow 'sexist'. They need to let this drop. a) The digital royalty appear to be begging their own status b) It's too obvious the attentivores want more of the same for their own brands c) The one of them who gets hurt is Felicia Day who will look sillier the longer this goes on for participating.

The problem of trusting the herd to keep one up on their shoulders is they are distractable and not that adverse to sacrificing one of their clients to better their own nests. It's hard to feel sympathetic. If they intend a movement to change things for women because as one commenter at Day's blog said, "The major figures aren't going to put up with this", then why bother with Vanity Fair to begin with. These ladies were already changing things before they gave into the attentivore reason for existing: to get just a bit more attention as glamour babes.

They may find out they aren't that major after this. I think they fear that and keep trying to spin this into a story where they are victims. There is some more attention to be had in that frame but frankly, I look at their photo and I look at the photos of Neda Soltan and have a hard time giving a damm.
Posted by Len Bullard at Monday, January 11, 2010 No comments: