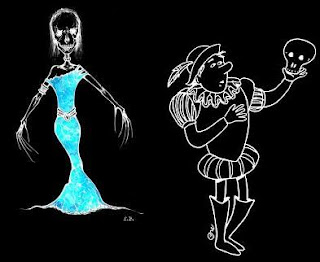 The press and the politicians can't get enough of Operation Neptune's Spear. I can't tell if I am more grossed out by the idea of the photos, the fact that they are using the decision about their release to do polybody slams, or that they are quarreling over who has the right to claim the kill?

Have American politics always been this much a blood sport? Gross.

Any high energy event(power to transform or render chaotic) emerges as chaotic as it enters a coherent domain and that is most of the real time phase of intense activity or maximum stress on the system maps. Most of what we accept is historic because locale creates an insulating quality over direct observation. As Rachel Maddow points out, it's bad to bet the conspiracy on facts as yet unverified and who you trust has a very direct effect.

The idiocy of conspiracy politics is that all accepted facts have this quality of local origin regardless of whether frequently or infrequently sampled. Attaching too much importance to any of them when not actually observed is the art of the conspiracy theorist.

There is the story of James, Son of Alphaeus, the second from the left disciple in da Vinci's Last Supper. James is forgotten to history in detail though his death by being stoned and clubbed in Jerusalem is known. Otherwise he is distinguished by being one of the witnesses to John's baptism of the Christ. Alone he is one who has no struggle to believe for he, a Jew, heard the voice of God proclaim the inheritance of his son. God named him Messiah so James only concern was his own status as the Betrayer. He knew the status of Jesus, he feared his own even though he knew what he had done.

We will always doubt. Trust is accepting sources are returning sources as close to real time with sufficient training to mentally note the items of interest. Or that the other person isn't lieing. Be it Jesus or a talking head du jour, ya gotta trust somebody. So in the end we trust whoever and whatever we like. In the end, James question is does he love his Lord well enough not to betray him to the very authorities he as a Jew in Roman palestine is bound to obey by law? Finally, he a Jew, must accept his own evidence of having heard the word of God and by this acceptance, becoming Christian.

We become whom we love, transformed by what we accept and act on. Or we lose coherence chasing conspiracies because we doubt and will not act. Obama chooses not to be Hamlet. Bene.

What's next? I guess it depends on who. For some, it's fear of getting on planes again. For others, it's finding out why the copter came down hard and had to be blown thus doubling the time of the op. For others, it's about finding a new bogey man. For a few, it's about justice and what we endure to see to it justice prevails.

For a perverse few, it is about shifting blame or taking credit. That's the dumb hum. It's the sound of generators, leaf blowers, and microwaves beeping. It is our insistence on covering up the night skies our grandfathers and great-grandfathers knew with a patina of light that obscures the millions of stars visible only if we turn it off. It is the sound of civilization but also the mechanical beat that disrupts the normal rhythms of breath, and room and ear. It divides our attention into little monotonic bits of time nowhere found in our natures.

Some ask what we did to make Usama Bin Laden hate us so much? It's simple. We put troops on the ground in Saudi Arabia to defend it while we ousted Saddam Hussein from Kuwait. As much stimulation as we get from putting on a hair coat, some people weren't 'good folk' who were leading normal lives when something we did offended them. Becoming a world class homocidal maniac capable of inspiring others takes a lifetime. In his case, it was a life of privilege but reduced status as the child of a minor wife in a society where such things are normal and son to a man who served a royal family that takes the wealth of its subjects and uses it for its own intrigues including the use of religious beliefs to maintain its positions of privilege.

Regardless of how often it is claimed we did, we didn't make Usama. We used him when he volunteered his wealth to fight our fight and he used us when he could not get enough of the fight to satisfy his own egomaniacal ambitions. It's an old story and not that complicated. It seems complicated because many use stories to launch their own initiatives for their own ambitions and so it goes. Time after time.

Because then they will be heard. They stand out from the dumb hum. The easiest way to make someone insane is to remove all sources of sensory stimulation until all they are left with is the hum of their own autonomic systems. That kind of deprivation cannot be overcome by our minds or spirits. There are many degrees of that. Don't beat yourselves up over this. It is in the nature of the organism.

Societies can and do try to make a better life but as the capacity for violence increases through the machinery of violence, there is always the danger that it will fall into the hands of those whom society cannot satisfy and we will always have such people. It was this reason that caused some of us who worked on the precursors to the web to fear its capacity to deliver so much technical information to so many. It made it possible to recruit, it has the natural effect of aggregating like types, it enables a single person to quickly find out how to make weapons of mass destruction then to find resources, materiel and even funding. It is the Krell machine and we are still monkey brained mammals enthralled by the dumb hum.

So do we enjoy the conversation or turn off the web? Do we continue to learn from each other or isolate ourselves in fear of ourselves? We hesitate or we act. No free lunch.

When the planes hit the towers a friend of mine in Ireland wrote to ask me what I thought the American response would be. I told him we'd mourn, clean up and when we knew who did it, we'd kill them. We have.

Obama chooses not to be Hamlet to enthralled by the dumb hum to act. Obama hopes not to be Macbeth. I hope not to miss the night sky in a hundred square miles of darkness even as I know that soon I once again will submit to the dumb hum.

If it were done when 'tis done, then 'twere well
It were done quickly: if the assassination
Could trammel up the consequence, and catch
With his surcease success; that but this blow
Might be the be-all and the end-all here,
But here, upon this bank and shoal of time,
We'ld jump the life to come. But in these cases
We still have judgment here; that we but teach
Bloody instructions, which, being taught, return
To plague the inventor: this even-handed justice
Commends the ingredients of our poison'd chalice
To our own lips. He's here in double trust;
First, as I am his kinsman and his subject,
Strong both against the deed; then, as his host,
Who should against his murderer shut the door,
Not bear the knife myself. Besides, this Duncan
Hath borne his faculties so meek, hath been
So clear in his great office, that his virtues
Will plead like angels, trumpet-tongued, against
The deep damnation of his taking-off;
And pity, like a naked new-born babe,
Striding the blast, or heaven's cherubim, horsed
Upon the sightless couriers of the air,
Shall blow the horrid deed in every eye,
That tears shall drown the wind. I have no spur
To prick the sides of my intent, but only
Vaulting ambition, which o'erleaps itself
And falls on the other.