BP and the Big Spill: Resilience

I am reposting some comments made elsewhere so they don't get lost in the blizzard. The noise levels about the disaster are not helping. The "Bush Would Have Been Skinned" or "Obama is an idiot" discussions don't help. Obama has no magic fairy dust for this. No one does. There is blame but we need facts and that takes time. Time is what we don't have right now.

"Out! We need no urging to hate humans! But for now, only a fool fights on a burning ship." (Kang: Star Trek)" (props to Steve DeRose)

It's one of the worst habits we've acquired: have a disaster and instead of facing the work, immediately apportioning blame. There is time for that after the fire is out. The Federal government is responsible for responding but doesn't have the resources or expertise. The Feds can't handle a deep sea capping operation. There will be some investigation required to understand BP's actions in that it appears they responded to save the well instead of capping it immediately. Flawed risk analysis often sources in flawed goals. Later. Cap the well first. Get the boats in the water first.

The way the DHS/FEMA protocols work is by organized panarchical Emergency Support Functions (ESF). There are fifteen ESFs. It is a strict chain of authorities, State Federal Local and Tribal agencies and protocols. Unless a fire is built under them, they can react slowly but usually it is an issue of recognizing the incident type and marshalling the resources to respond. An unfortunate side effect of putting FEMA under DHS is it is reponsive to terrorism but a bit slower to react to other incident types. The State is in charge until the President declares otherwise. The most serious problem is this is organized around resources (think equipment, personnel, funding). The States don''t have the resources for this particular incident type and neither do the Feds. BP holds most of the marbles and BP had not planned for it so the resources were obtained and applied far later than an incident of this type demanded.

Here is a diagram illustrating the process by which the various authorities activate by presidential directive. 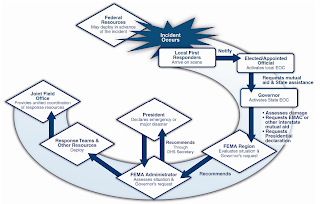 Another problem is the public safety industry products are centered in high cost dispatch systems for local agencies. These are good for real-time dispatch to house fires, traffic accidents, crimes, and so on but wholly unsuitable for cross-jurisdiction event-driven response. A different approach is required and the systems here are just coming on the market. In this aspect, the BP spill is more like 9/11 than Katrina. Fast reactions across the multiple authorities and agencies are required. CAD systems are lousy at this for technical and organizational reasons.

You can't touch your elbow with the fingers on the same arm. IOW, a system based on pre-placed configured assets has to understand the incident type before it happens. We can simulate and play what-if, but the fixed arm length is having the resources in place because all of the response plans ultimately come down to dispatching resources to specific detailed situations and these are spread out across agencies and jurisdictions as I describe above. To repeat, neither the Feds nor DoD have the resources or the expertise to handle oil spills in this specific situation. They have never seen this and Valdez only applies insofar as it is oil and it is washing up. As you go up the chain of authority, the knowledge gets thinner but the responsibility gets greater. That is why the advisors have to be very well-trained, the information has to be very current (real time if possible), and the locations of resources identified in advance. Then you have to have a communications system that seamlessly puts all of that together. Think $$$.

The key word is resilience: coherent response in the face of novelty. The public safety folk have become very resilient responding to and mitigating acts of terrorism, conducting mass evacuations, etc. They are adapting as fast as they can to this novel situation but unfortunately not fast enough to avoid the catastrophe unfolding before you. Also keep in mind, BP is not an American company. Coordination with foreign governments and companies is ESF#15 and that is handled by the State Department. Post-event, some learning in that function may be necessary. I doubt the State Department is practiced at this kind of work and practice is the sine qua non of disaster response.

ESF#10 organizes Oil and Hazardous Materials response. It is a specialized response and requires analysis given failures in the current incident. Important to note here is Volunteer Registration and deployment. In 9/11, volunteers appeared everywhere ready to help. It's a noble instinct; however, not everyone who shows up are a) who they claim to be and b) trained to the work. As a result, there are standards for Volunteer handling and these require positive identification and proof of skills. This enables response crews to vette and badge these volunteers. Why are the shrimpers denied access to the Gulf? Very few are trained in hazardous materials handling and are required by protocol to be trained first. What happens otherwise? They can go into the scene and injure themselves and pose a danger to others. Media plays up the fact that workers on the boat are getting ill. They have to prove it is a result of the oil but it is likely they aren't trained for the task and are not protecting themselves. Media skirts that explanation because it doesn't have the right victims.

Media IS a problem. There is an ESF for handling the media but it can't corral them or write their stories. A larger problem in our culture has been the death of professional and responsible journalism but that's a topic for another time. Simply be aware when you are seeing stories on this and other events such as the immigration problems you aren't always given the facts and even if given them, the framing is such that your emotions are being stirred instead of you critical faculties.

Critique without critical thinking is toxic. It turns you into a Weapon of Mass Distraction.

This is the good news: if everyone does their job in analyzing and documenting this, the system does learn. It is possible to enhance the safety, improve the response and adapt. This does rely on coordinated communications and here improvements in technology will be helpful. Obama did the right thing delaying or cancelling leases. That response ensures the system slows down long enough to learn even as it is adapting to the current catastrophe.

Since the nuclear option is being discussed by some, here are two videos. The first is of what is called, The Gates of Hell, the result of an accidental puncture into an underground gas cavern. This has been burning since 1971.


The second is a Soviet era film propagandizing the use of the a small kiloton nuclear device to push the surrounding earth to squeeze the well closed. I've no comment on this because emotionally it is abhorrent and technically, I'm not qualified.