Open Mic at The Bluebird 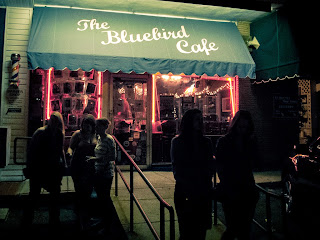 This article is mainly for my friends who are songwriters considering going to The Bluebird in Nashville for their Monday Open Mic Night. Open Mic Night is the opportunity to simply show up and play in a room that is arguably the Carnegie Hall of songwriter rooms. In other words you play there to play there. Songwriters don't get "discovered" or "make it" at The Bluebird. They get to play their songs to an appreciative audience. Full stop. Adjust expectations accordingly.
I've played at the Sunday Songwriters Night which is an audition-filtered event. That is a different show where songwriters who pass the audition can appear when scheduled in six month intervals and play a show with nine other writers one of whom will be the headliner and a professional. The open mic night is a "line up, sign up, get a number, go on when called". You wait in a long line outside because the seats inside are given to the paying customers who also wait in a long line for the privilege of getting a seat. Some pointers:


Take your best song, a guitar with fresh strings and your humility. This is fun, it is good for your confidence and it is The Bluebird. It won't make you famous. It will make you better. As a songwriter AND a musician, get up every day and get better.

A postscript: as I was leaving town, I went into a Burger King to find a bathroom and get a burger. The restaurant manager behind the counter was looking at a rap video a customer was showing him and telling him how to best market his song. This is Nashville: Wall to Wall.
Posted by Len Bullard at Tuesday, May 12, 2015 No comments: