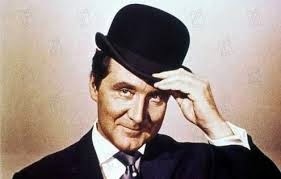 Television has a long history of heroes from the virile Wyatt Earps of the 1950s to the rough hewn Special Agent Leroy Jethro Gibbs of today.  Yet few have ever been as cunning, classy and laissez faire as The Avenger John Steed.

While the series changes considerably in cast, tone and special efffects over the eight year run, John Steed is the single constant throughout.  As young boys, we all fell in love with his beautiful assistants, yet it was Steed who shaped our characters, who demonstated qualities that would serve us well as young men and older men.  He was polished, unfaiingly polite even when he took advantage of his assistant's skills, always the courteous companion.  Even when taken by their charms, he was ready to serve, ready to defend and never stood in their way or questioned their judgement.  He was in fact, the perfect gentleman.

This is a character almost impossible to find on television today and as we wind through the zeitgeist when everything about men's behavior toward women and others is being questioned, young boys would do well to emulate the ever bowlered John Steed.  If in fact the character of Steed owed his witty ripostes to his writers and his wardrobe to the best of British and French clothing designers, he owed his gentlemanly manners to the actor that portrayed him, Patrick Macnee.   While Macnee would go on to play other TV characters including the notorious Cylon Nebeli in the original Starship Gallactica, he is best remembered for his portrayal of John Steed.

As an older man, a Southerner, someone born in the counry to the country folk of Alabama, it seems right to thank Patrick Macnee for John Steed.  Art reaches further than we know and molds characters in ways and at distances often unknown to the artist.  Macnee showed us how a man could be both refined and a man of action, cunning and kind and that a woman must be treated as an equal and a partner.  If his diction was crisp, he was never condescending.  If his walk was slow, his back was straight.  And every person be they high born or the village drunk was accorded courtesy.

This is what it is to be a well-bred man and whether it is a quality of birth in some or self-made character in others, it can be taught by example. If ths is a credit to Macnee's acting skills or to the evolution of the character, it little matters. Both achieve a perfection of an archetypal good man, admirable, to be respected, cherished and remembered.

So my hat is off to Patrick Macnee and wherever he is, let him know he taught well and for that many are grateful.  I wish there were more of him.