Schadenfreude is for Losers

What an incredibly beautiful day!

I am amazed how far some will run to hide a truth everyone knows. Life in a golden cage isn't life at all.

Posted by Len Bullard at Thursday, February 12, 2009 No comments: 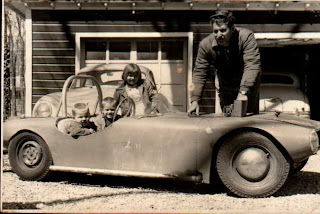 In the photo, I'm the whelp in the middle. My sister, Beverly, is standing and my younger brother, Michael, is front. He now looks much older than me proving it really is the mileage.

The car was called "The Shingle" by the men who built it. In the Fifties, we lived on Monte Sano Mountain, a hill on the edge of town that once had a resort for the northern wealthy to escape the heat but enjoy the charms of the South. We lived across the street from the site of the hotel long since burned to the ground and then only a chimney remained. The photo was taken down the street a few blocks and the house is still there. We lived in an old rock house that is also still there. The car is in a museum somewhere up north. I don't know where. I was away at college when Dad finally sold his proudest work to make bills.

The Shingle was infamous. It was the second car of two my Dad built with his neighbor and friends who were exceptional ex-Army Missile Command and when the photo was taken, NASA scientists. Dad had customized cars to run 'shine, and these guys got on like a house on fire. They wrapped the engine in special thermal blankets developed for heat shielding. The instructions to the driver was simple: put the pedal to the metal and leave it there. The car was a rolling wing and the air over it held it on the track even in curves. At the experimental track in Courtland, they would infuriate the Europeans who could not believe this 6'5" hillbilly was beating them with a piece of tin junk and a Crosley engine. The secret sauce was the two smiling men at every race wearing coveralls like my Dad and drinking coffee from his special thermos, both of whom would also help send man to the Moon in the next decade. Boys with toys.

Life as a kid was fascinating.
Posted by Len Bullard at Wednesday, February 11, 2009 No comments:

Where Ali Baba once had only 40 thieves, now he has 40000 and they are too old to learn new tricks. They want the money. They don't want conditions.

It was the wrong speech. Obama was selling fear and when it gets right down to it, people will be angrier with the man who took their hope than the men who took their money. He is still, when off teleprompter, a bit too much the minority professor who did well and feels entitled to respect because he won. Washington doesn't work that way. Heck, the world doesn't work that way. The big guns in the financial world and the Republican Party are looking at him and saying "Whatcha got? Whatcha gonna do about it?" and they mean in terms of real consequences. Otherwise, they stand back and let him posture.

Did we think this was going to be a Beach Party with Moondoggie making up with Annette and then everyone boogaloos to Dick and The Dervishes? Or does Erick Von Zipper dress in a suit and suddenly his gang becomes civilized? This is the scene in Gone With the Wind where the young men have parties with young women all gaily dressed thinking they are going to a summer lark called The Civil War. This is the beginning. It won't be civil.

Welcome to the reality of what the Kennedy Administration was like, not the rose-colored view in the rearview mirror through the fog of generational wish fulfillment. He was young, brash, occasionally out to lunch and all the world wondered if the kid had any moxie or plans. Enemies moved on us, the markets were a roller coaster, and the social agendas were all pushed at one time. It was scary. Then he was killed and the Beatles came to America to distract us and Johnson dulled us into self-medicating a generation.

By contrast, this isn't that bad. Feel better now?

Posted by Len Bullard at Wednesday, February 11, 2009 No comments:

Odd bits of bull from the bullmeister:

Don't Recommend: Paul Graham's blog on keeping identity small. Ok, so the Buddha was right: attachment to self is the root cause of suffering. It bears repeating from time to time, but blogs like that get into the Web Mythos as Yet Another Profound Insight but it is more rebranding of ideas best learned from the original master.

Recommend: Write your own funeral music. I'm working on a 'kyrie', or penitent choral piece suitable for the pre-Easter season. I'm using a seven note theme from a Beethoven piano sonata. Anyone who thinks I won't have my own music played at my last gig above ground doesn't know me very well. Why do it? Because as a habitual composer, it rounds out the season for my time here and there is a certain peace in knowing it is done. It doesn't mean I'm taking the A-train soon, but just that when I do, my bags are packed.

Don't Recommend: Java The Language. Why? After a decade of the mob beating on Microsoft and ASP.Net, today with the economy shredding, Java programmers are a dime a dozen and ASP.Net programmers cost mucho dinero. The law of supply and demand was not suspended. By limiting the attractiveness to young programmers, they drove up the value of ASP.Net. Karma.

Recommend: More patience with Obama. It takes more than a few weeks to sell a house. It takes a bit more to change Washington's negotiating strategies. Give him time.

Don't Recommend: paying with cash at Wal-Mart or Target. "What's that?" "Well, we call it money." "What's it for?" "Look at the number on the display. Now add the numbers on those green pieces of paper and see if it is the same. Ok, now see those round metallic objects in the drawer. Yes, good, now take out three of the big shiny ones and one of the small shiny ones. That's right. No, you can keep the dull copper one."

Sigh... the life of the lonely bull chasing the red flags of a society cheering for the gore!

Posted by Len Bullard at Tuesday, February 10, 2009 No comments:

Congratulations to T-Bone Burnett, Allison Krause and Robert Plant who won five Grammys last night with their Raising Sand group. T-Bone is the wise old regular on Jon Taplin's blog, but a veteran survivor of a long career in music. While the DJs will make much of Plant and Krause, the genius is the long-haired blonde fellow on the guitar with the mensch smile. If you don't know who he is, go to your favorite search engine and find out. If you do, go to YouTube and enjoy!

Way to go, T! Of course, this IS what the web and YouTube are good for.