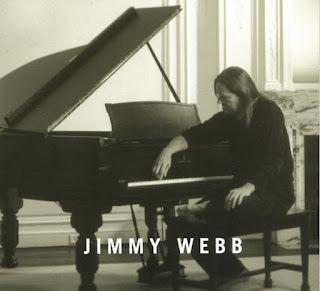 I'm halfway through Jimmy Webb''s Tunesmith: Inside the Art of Songwriting. It is simply the best book on the smithy aspects of songwriting I've had the good fortune to read. My thanks to Chuck Puckett for insisting I get and read it. It had been mentioned in other contexts but that was the sign of the symptom. Used copies from Amazon with shipping are less than ten bucks; so for the price of a latte and a doughnut, you can own a treasure trove explaining in detail how to craft a professionally written song. If you are a songwriter, getcha one.

I thought this would be a breezy book full of anecdotes of an unarguably spectacular career. Instead it is a densely packed master course in the craft of songwriting full of anecdotes of an unarguably spectacular career. The only place I might quibble is his distaste for home recording studios but when the book was written, the Nineties, he was right. As Terry Woodford at Wishbone Studios once warned me, "They get those fuckin' four tracks and turn into engineers and forget to write songs." Having experienced the four-track to eight-track to sixteen-track to sequencers to samplers and finally to digital workstations evolution and wasted hours and hours chasing a ground fault instead of recording, he was right. Complexity kills creativity. On the other hand, like the character on Night Court, it is much better now and a good home recording system that is easy to operate is within anyone's reach. That said, if you can't just step into the "magic circle" turn it on and start working, get rid of it and buy something simpler. Gear junkies are not the friends of songwriters or music in general. Really.

The chapters on writing lyrics are quite good. I don't know many songwriters who use the term metric foot but those who understand it write better lyrics from a musical standpoint. An irritation when listening to songwriters perform their songs is that they can't precisely understand why a lyric sounds forced or is awkward to sing, that is, getting vowels and consonants lined up with the beats is really not an inconvenience. Musicality and semantics (what do I want to say in this song) contend for dominance but it is a song and musicality or singability should win.

Now comes the part of the book I suspect many people skip: chord theory, progression, substitutions and functions. Here is where the good songwriters and the excellent songwriters part company usually in the snark of a Nashville attitude of chord policing. Webb talks a bit about that but disregards it and goes on to explain the aspects of voicing that make the difference between a guitar player and a guitar thinker, between someone who can sing a Crosby Stills and Nash harmony and someone who understands why Mozart is as good as it gets.

One can network and get a certain distance even a profitable one into the music business. One can study theory and find oneself shut out of certain networks or called "cerebral", but eventually triads run out of steam and writing about daisy dukes, whiskey, and screwing in the back of a pickup means the songs are interchangeable and forgettable, then success or a career is a matter of who you know or blow and not your skill and the elegance of your work. Pretty only goes so far or lasts so long and even cleverness loses to one prettier that day or more willing. Be appropriate to style but don't limit yourself to one. The ability to analyze and write in any style is the hallmark of a professional.

There are singers, songwriters, singer-songwriters and composers and if one wants to take the adventure of a lifetime that is music, it pays to keep at the study of music as much as the practice. And this is where too many who frequent the songwriter nights fall off the chuck wagon.

Life is a long song. If you want to thrive in the multiverse, cross the bridge.
Posted by Len Bullard at Tuesday, June 02, 2015 No comments: