3D On The Cheap: You Say You Want A Revolution?

When I was a young musician, I owned a 1966 VW Microbus just like my hero, Arlo Guthrie. As with most trends, a practical reason drove the adoption of cheap technologies: a '66 VW bus had gears on the wheels that enabled a 40hp engine to push a heavy load a long ways reliably. It wasn't fast off the line but it was very cheap. For the young musician starting out, a van that hauled equipment, a bass player and two girls we picked up at the last gig to the next gig, that was a miracle of modern technology and the market.

Today I have less hair, the same bass player, and I married a girl that rode in that Microbus; so, regardless of the zeitgeist, a good affordable technology goes a long way toward getting you to the first gig and the last. My philosophy of cheap powerful tools has not changed; only the gig. I make 3D worlds.

Courtesy of Tony Parisi and Keith Victor and Media Machines, there is a cheap 3D editor that can do what that VW microbus could do: get you to the gig on time and under budget. In fact, unlike that bus which cost me $250 in 1973 dollars, this 3D is editor is FREE!

Today, we are making pots. No, not the Gaz-Giz kind, but the kind you put in your new virtual apartment. You have one of those, yes? Everyone who is anyone does. Geez…

To do this, we use a feature sometimes called by graphics geeks, the Surface of Revolution. It sounds cool and it is. I don't understand a lot of graphicsGeekSpeak and you probably don't either, so say, Amen and move on. Think of the Surface of Revolution as a potter's wheel or a lathe. When the object is turned, it takes the shape where ever you are pressing on the clay or the cutting blade touches the wood or metal. In Virtual Reality, all of this is virtual. Makes sense, yes? You place points to create a line that describes the outline of one side of the pot, press the Show Me button, and the computer makes the shape. It doesn't get easier than that. Or cheaper.

If you have downloaded and installed the Flux Studio 2.0 editor, open it. On the left are the windows that display what you build. Think of these as your scribing surface, drawing panel, back-of-an-IHOP-napkin. These are where objects are displayed. Parallel and on the upper right is a Treeview control that enables you to select objects by their name and position them in the scene relative to other objects. Below that is the dialog that displays the properties of these objects. Of you select an object in the Treeview, the dialog below will show you its adjustable properties. These are displayed as tabs.

At the top are drop down menus. There are icons beneath and around the borders for different construction techniques. Click on the Create menu. 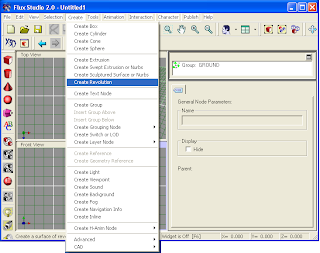 In the figure above, you see the drop down Create menu. Click the Create Revolution menu item. Take a moment to enjoy that thought.

A pair of small windows pop up on the screen. The one on the left is a drawing pane. Here is where you place, move, add and delete the points of the line that is a silhouette of the shape of your revolution. If you have a copy of the Jefferson Airplane "Volunteers", now is a good time to put it on. On the left of the screen in the Treeview, notice the small vase-like icon with the label "Revolution: Revolution1". The label is duplicated in the dialog "General Node Parameters" below. 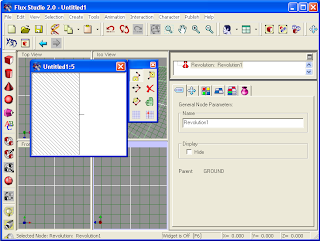 The window to the left of the drawing pane is the control window for creating revolutions. As labeled below, you see that each button changes what the cursor does when you click in the drawing pane. 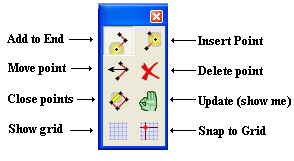