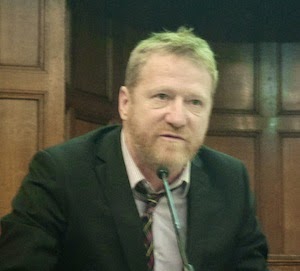 And of course the open letter to David Lowery was received with diplomacy and serious consideration.  Not.

In his view the world is filled with "scofflaws" who are all stealing from the artists.  He says that rooms where this is not the case are "sasquatch sightings" and that people from "Alabama" are "like that".  He feels "threatened".

In other words the primary campaigner for fairness for artists is afraid to admit that there might be other possibilities.  Or so infatuated with the status that role has brought him he has become yet another anachronism who goes over the top and has yet to realize his credibility as a representative of recording artists is evaporating.

And that is a problem for the campaign to get artist equity in the brave new world of digital distribution.  Yes, there is a lot of ripoff going on.   Yes, copyright is being eviscerated.

Yet there is another story, a story where the same people who are appointed to collect fees are robbing piggy banks.  From the original mistakes made by the recording and publishing industry prosecuting housewives for making wedding videos to now there has been a noticeable reluctance to admit that there need to be changes, that scarcity is impossible and that the technical world will not roll backward.   Some of us have worked hard to find solutions and reconcile the need for payments for copyright material with the near impossible requests to stop piracy.   But these efforts will go on because piracy is wrong and it fuels even worse criminal activity.  In short, I do support those efforts and have even before Lowery became a champion.

But badgering small coffee house open mic nights where it is obvious to even the casual observer that they don't actually have the money to pay three collection agencies every year is bullying.   Should BMI/ASCAP/SESAC be threatening the coffee houses holding open mic nights?

There are at least two extremes and no one is asking an obvious question: what is the threshhold for payments vs money made and covers sung or is it simply 1k a year per collection agency if even one cover is sung? And if so, is that right?

There is an opportunity for the professional artists and publishers to do something smart, gracious and decent.   It is an opportunity to show the world they aren't cold hard greedy self-serving assholes determined only to preserve their own income sources at the cost of everyone else.   If they can't see this or figure out how to do it, then they deserve neither our help or our respect.   And let the pirates have them.   If they can't help the new talent, then they are of no value to music as an art, a craft or an industry.   Working "only with the best", telling others not to vote for "second raters", these are symptomatic of elitism, forgetting that once upon a time it was they who "played real good for free".

Open Letter To David Lowery at The Trichordist

When ASCAP/BMI/SESAC stops demanding payments from the little coffee shops where kids have to sing all original all night long because 3k a year really is more than they can afford, so they have to take up donations to pay for covers, maybe there will be some semblance of sanity on both ends of the copyright wars.  I went to a brew pub where four songwriters held the stage for two hours for maybe and audience of five and only one of those not a girlfriend of a performer.  All paid up. Then I went to the college coffee shop where it was packed wall to wall with kids with guitars and one gay guy with a ukelele, hot as hell, kids sprawling down the sidewalk, puny PA, no organization but a scribbled sign up list, and they were singing their hearts out.  For free.  No covers.  They can't afford them.

As the twig is bent, David, so grows the tree.   I've spent time fighting for the Bigs because the tech industry of which I've been a part is ripping the artists off.  Yet there is so much frikkin' greed that they can't cut those kids a break.   And maybe that's karma because if those kids keep singing their own songs in one generation they will forget the Moptops, flower power, and grunge.  They will remember Jason Mraz, Isbell, maybe even some Peter Paul and Mary, but they will say to hell with the collection agencies who cannot cut them a break, who force them to beg for tips to pay the vig.  You want their support?  Talk to the Boys and tell them to set a tier for collections.  Quit robbing piggy banks.   If the music matters that much, then let the backyard gardens grow.  That  is where the new music is coming from and they don't need you, they don't need Taplin who calls them second rate and they don't need T-Bone Burnett who only "works with the best".   They are the future and if you can't help them when they need help, then to hell with you.   You don't matter.  You're done.   But if you do, then maybe there is a coming generation that will see to it the right thing happens.   Your choice
Posted by Len Bullard at Thursday, July 24, 2014 No comments: