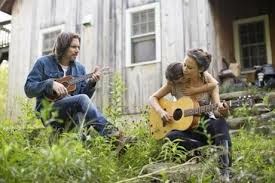 While it is not always a polite turn to review the work of other musicians, I'm making an exception.  Last night it was my privilege to attend a concert by Sarah Lee Guthrie and Johnny Irion.  Short version: they were awesome.

I first heard Sarah Lee some years ago when I chanced upon a YouTube video of her performing Pete Seeger's Sailing on The Golden River with her father, Arlo Guthrie.  She has the voice of a sparrow and the nearest comparison I have is Edith Piaf in that small frames and supple voices produce a unique soprano sound.  More about that later.   She has her mother's light figure and the intense studious expression of her father on the cover of Washington County.

Five years ago I traveled with my wife to see Arlo perform at the Guthrie Center in Great Barrington, Massachusetts in the Western Berkshires a few miles from Stockbridge.  Arlo fans know this is the Church where Alice's Restaurant was filmed and the area surrounding it is where the events that are the basis for the movie occurred, or as Sarah Lee called it, "the hippie stuff".   It was one of the best journeys I've taken meeting some of the nicest most sincere caring folks I've known.  It is a journey to an ashram of my generation and I highly recommend it, but this is not about the Restaurant or the Church or even Alice.

During that weekend, we were to attend two performances of Arlo and his family in what was a dress rehearsal for their upcoming tour.  On the first night, unfortunately, Arlo had to be treated for a fall and could not perform.  We were lined up in front of the Church and thought we would have to return to the hotel when the word went out that the rest of the family would go on with the concert.  With not much time to get ready, they did exactly that and the evening was a rousing success.  Watching them it was notable that parts of the evening were Johnny and Sarah filling in with their own act.  While Abe Guthrie held the band together, Sarah was directing, quiet but determined.  She had steel in her spine, the Guthrie sense of show and the love of music and the people who had come to see them.  Tiny but tough; again, Piaf.

Johnny was acquitting himself as a fine singer and guitarist playing blues, folk and rock with equal parts imitation and original feel. Being on a stage with a family of performers, he was fitting in, accenting and otherwise helping Sarah and the Guthrie sisters, Cathy (Folk Uke) and Annie (a solo performer) take care of the Guthrie kids on stage with them.  Even when chaotic, it was entertaining and dearly real.

The next evening, Arlo came and it was a fine start to the family tour.  I've videos of both evenings and an excerpt of that is at my YouTube site featuring Arlo and the Family playing Gypsy Davey.  As I said to friends before leaving that night, I felt that I was watching not a passing of the torch, but a reassurance of continuity, that the legacy of Woody Guthrie passed to Arlo Guthrie would be in very capable hands when he passed that torch to his children.

I was delighted to read that Sarah and Johnny were coming to Huntsville Alabama.  No Guthrie has ever come here to my knowledge.  Aside:  Johnny told the audience he lived in Huntsville when a toddler.  Sarah responded she didn't know that and then asked if he had been here why did he get them lost on the way?  In this, watching them is like watching Steve Lawrence and Eydie Gorme: a married couple who know how to perform together and make their family kibitzing entertaining.

The Straight to Ale Brewpub is a largish commercial building in a commercial district of South Huntsville.  A small wooden platform stage is set up at the end of the brew room across from the tanks and in front of the barrels and decorated with the brewery emblem, a red and white devil symbol with a trident in the middle (yes, the Straight to Ale name is that).  It is a cold room as in frosty.  It was sold out to the tune of 60 more tickets than seats so a well-attended show.  This is a listening room and Stephen, the impressario, was sure to remind everyone to "listen".  Dana and I arrived early to get the reserved front row seats and thus got the best seats in the house directly center front.

This is not a songlist review.  First, Sarah amd Johnny do not play songs most of us know.  They play their own songs and occasionally a song by Pete Seeger or her grandfather, Woody Guthrie.  Even then as Sarah said, they tend to do the obscure songs from other writers.  What follows is my sense of their performance.

Their songs are extremely well-crafted.  I am a songwriter and I understand how much work goes into that.  The emotions are painted not in cheerful contrasting colors but blended thoughtfully and still spontaneously.  While Sarah Lee is the name, certainly the looks and the wistful voice, Johnny is the engine, a strong player and writer, passionate ranging vocal, moving and twisting as he physically wrenches the notes from his guitar.  He is a consummate chord master and confident.  Whereas far too many so-called new tradition folkies limit themselves to traditional progressions as if the ghosts of the Nashville Chord Police and the limited style of Woody frowns down on them, Johnny's arrangements have hints of Neil Young and America with a little Steely Dan for flavoring.  There is a Beatle-like cheerfulness even in the somber ballads.  He is a craftsman, an artist and if he continues to hone his craft will emerge as one of the best songwriters and stylists of this new generation of songwriters.  He will not be constrained by a genre.  He will surpass it and there is where his inate astute genius will be realized.

They are very aware of their sound physically and emotionally.  You can watch them position themselves to take maximum advantage of microphone proximity and how it affects their dynamic vocal blending.  Their voices are perfectly matched even.  Johnny has considerable range, embraces his falsetto and uses it to perfectly match Sarah's natural high voice.  They never overpower each other and that is a difficult trick to master.  Here is where the time on the road together shows.  They meet each other in the soaring harmonies in an exquisite twisting melodicism as if their love for each other and their audience were a children's playground of slides, tilt a whirls and swings pushing each other in cascading arcs.

They are very respecful of natural sound resisting the temptation to rely strictly on the PA.  At one point, Sarah Lee stepped to the front of the stage awsy from the microphones and sang acapella directly to the crowd.  In a room that big, that was a very brave move.  And it was exquisite.  No one in the room moved and barely breathed until she sang the last note.  Sitting just a few feet in front of her, Dana and I were enraptured.  Later both she and Johnny left the stage and stood on the floor in front of us and sang to the audience Sarah asking if the people in the back could hear.  It expressed something Arlo told us once on his arlo.net website, that a good sound sounds just like it does three feet in front of the singer.  This is where the tradition of folk singers is felt, that it is an intimate sound no matter the sixe of the crowd or the power of the singer.  And they nailed it every time.

They are both natural storytellers spicing up the air between songs with tales of living among the greats of the last generation of folk musicians, the friends of Arlo, life in the Berkshires which they love, living in a family on the mountain close but not "too close" to her legendary father.  Sarah spoke wistfully of her late mother, Jackie who passed last year and of her daughter that I had seen a few years earlier stomping on Sarah's dinner as she spoke to people in the Church foyer, that the girl spoke of seeing her "Nana" becoming an angel.

It was painful and honest and so completely Sarah.  In this she perfectly projects the love that characterizes the Guthries.  They are spirited, animated, giving and disdainful of the title of being the first family, the royalty of folk music yet completely aware of a responsibility or the gift to reach out to the audience and reflect the love projected on them.  It is the heroism of the tradition, that people matter, that love cannot be overtaken by events or even death.  Love endures.  That light shines from their eyes and they share it cheerfully and honestly.

This is much too long and the concert was much too short even as she said they were keeping us too long. Folk music may not be the power politic of her father's generation.  Still it was Arlo who stepped forward in dark times, scary times, times when people were dieing in VietNam and even on the American streets, it waa Arlo who found a humor that we could share and would get us through to the other side.  For this and other reasons Arlo Guthrie is a personal hero to me.  There is enormous joy in seeing Sarah Lee and Johnny carry that heroism forward, a heroism of caring about people, of forming and sustaining a community of like minded and even contrary individuals.

And that is the beautiful thought I came away with last night: the spirit of the family, the legacy of Woody and the Weavers, of Pete Seeger, of all the singers and songwriters who always appear when we need them, the gifts of love and music are in such capable, gentle hands.  As she sings, she fills her Daddy's shoes and with her partner in music and life and love, Johnny, will carry on his work in their own way, for their own times with clarity, joy and affection.

Invite them back.  Bring their friends here.   We are an engineering city, a heart of darkness in a world of military contractors and harsh hard metal.  And they let a little light shine last night.   And it salves the pain.
Posted by Len Bullard at Sunday, January 19, 2014

I'm sorry I missed this one. I'll have to make it for the next one and hopefully there will be a next one.

Hey, Pete ain't dead yet! He sang TLIYL last September in Saratoga Springs. Not time to be talking about legacy.

No he isn't but legacy stars before we die because that is when we can still tutor. They have some funny stories about what Pete has to say to them. It's a good thing to learn from Mr. Ed before he's dead because a horse is a horse, of course.

I hope they come back, Dan, but ya never know. I also hope they tell some of their friends that Huntsville is a good gig. I'd like to see Folk Uke and the Burns Sisters come here. And of course, Gnarly Arlo, but I'm not holding my breath. Sarah Lee and Johnny really were good. No hype; just truth.